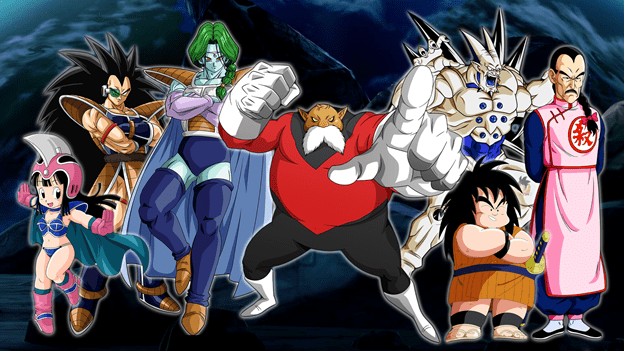 The developers of Dragon Ball FighterZ have already revealed the next character coming to the game — it’s Android 21 in her human form (Lab Coat).

While she seems to be a pretty logical addition to the list of FighterZ (Android 21 has been created especially for this game; we can’t have only one of her), it still feels much more exciting to see fresh faces in the game.

It is unknown whether the game gets someone else in addition to Android 21, but it’s so entertaining to try and imagine great stuff happening with your favorite game.

Here are seven characters that would become great DLCs for Dragon Ball FighterZ.

He is a brother of Goku, but the personality of Raditz is so different. This guy is mighty and ruthless. As a child, he had a high enough level of power to join the elite troops of Saiyans.

The story of Raditz in the Dragon Ball Z anime is short, and that makes him a good choice for DLC — to let the guy shine once again. Piccolo and Goku attacked Raditz when he tried to convince his brother to become a normal evil Saiyan, destroy the Earth, and start occupying other planets. Raditz was very strong in comparison to that level of his opponents. Only the joint effort and some help from Gohan allowed the heroes to kill this villain.

Raditz hoped that his partners, Vegeta and Nappa would return him to life with Dragon Ball. Nope, they tried to use the magic for their own immortality — and actually failed. Raditz remained in Hell, and DBFZ might be his chance to get revived.

Yep, he is another Saiyan, but Raditz is an evil one, and that’s cool. He has a lot of potential in the fighting game!

This guy is lazy, loves delicious food, and is reluctant to join the fight when there are little personal benefits for him. Such reasons as saving the world or even his friends might not be a strong motivation for Yajirobe. But when he actually decides to battle, he surprises everyone with lightning splashes of power.

It was Yajirobe who cut the tale of Vegeta in his great ape form. That bravery continued for a moment, but it helped Goku defeat this opponent (that was the early stage of their acquaintance).

Yajirobe’s personality is unique in the roster of Dragon Ball FighterZ characters — he is not your traditional hero, and he is totally not evil. Yajirobe is an interesting character to play around with in the fighting game environment. His Katana is such a deadly weapon!

In the original anime series, this character is dreadful. Tao Pai Pai was kind of a synonym of instant death. As an assassin, he took the most difficult orders for huge money. And he completed each and every one of them. Or he did that until the Red Ribbon Army ordered him to kill Goku.

That turned out to be a huge problem for the kid. Goku survived only because Tao Pai Pai prematurely decided he’s already dead. In the attempts to become stronger, Goku climbed up to the Korin Tower and took lessons from Korin Sama. In the following battle, the boy defeated Tao Pai Pai, but that was the assassin himself who threw a bomb and then got badly damaged in the explosion.

Tao Pai Pai created a robotic body and became an even better killing machine to participate in another Tenkaichi tournament and finely get rid of annoying Goku. It was too late. His enemy became too powerful and almost did not notice Tao Pai Pai as an opponent.

This character is certainly nothing in comparison to the Dragon Ball Z level of power (Goku, Vegeta, Frieza, etc). And still, Tao Pai Pai would be a fun fighter to play. His assassins techniques might bring fresh energy into fights. (And if Krillin was buffed to correspond with the might of alien warriors, it’s also possible for Tao Pai Pai).

This Shadow Dragon is selfish and evil to the max. And being the last villain in the original anime trilogy, he is awfully strong. Fighting games players would love Syn Shenron.

The very fact that it’s a Dragon in a humanoid form makes Syn Shenron so special. This character is known also as Omega Shenron, and Dragon Ball FighterZ would get even more exciting with him.

Ironically, brave heroes themselves created this creature. King Kai came up with the idea to make a wish and revive everyone on Namek killed by Frieza. Mr Poppo said this wish to Shenron, the Earth Dragon. Such a change in reality had its consequences, and Omega Shenron came into existence.

In the Dragon Ball GT anime, Syn Shenron even tried to destroy the Earth. Of course, Goku stopped him — with some help from other heroes. Let us continue this awesome fight in DBFZ, please. Syn Shenron would be a great fighter!

In Dragon Ball Z, Chi-Chi is an adult woman with a bit of a hysterical temper. She cares about her son Gohan rather too much and totally can’t control her emotions. Chi-Chi was different in the original Dragon Ball anime.

She was a very strong girl, able to defeat evil enemies with a surprise attack (while still crying). Kid Chi-Chi looked so unusual with her helmet. As a character, she would be a great friend for Goku GT. Ok, they could also be great opponents.

Adding Chi-Chi would be a challenge for the developers as you need to keep her abilities relevant for the perfect balance of Dragon Ball FighterZ. But that means we could get something super cool and unusual — maybe another weird character of the Master Roshi level.

When Frieza looked for Dragon Ball on Namek, he took two mighty warriors to his team, Dodoria and Zarbon. They were defeated rather quickly — by Vegeta, who also wanted those Balls. But Zarbon gave quite a fight.

This guy is very interesting for the fighting genre thanks to his hidden power. In a usual, day-to-day form, Zarbon is handsome. Bulma couldn’t believe someone with such an appearance is a bad guy. But when Zarbon wants to fight seriously, he turns into a monster, raising his strength significantly. Imagine having that as one of his Supers in DBFZ.

In addition to this transformation, Zarbon might have some mighty (and probably straightforward) attacks. He would strengthen the evil crowd of the roster and become a good choice for beginners (for those who want to oppose Goku and co.)

I’ve added some jokes about DBFZ players loving bad guys in fights. Alright, many of us actually prefer the good side — but with some cool transformations and great powerful attacks. Toppo (or Top) is a superb choice here!

He is a leader of Pride Troopers with strict moral principles. Justice and fair play are not empty words for Toppo. He lives to share these noble ideas throughout the whole Universe. And he is ready to fight anyone who tries to oppose.

Toppo is a skillful fighter. He can even be equal to Goku and Vegeta in their Super Saiyan Blue form.

Also, this guy has a great feature — he can transform into an even more powerful form, Top the Destroyer. For this, Toppo abandons his ideas of justice (what?!) and automatically unleashed extra power. In the anime that happens when Toppo’s desire to win the Tournament of Power clouded his mind. It would be super interesting to see how the developers implement the character in Dragon Ball FIghterZ.

Dragon Ball is full of remarkable personalities. Certainly, not all of them can make it to DBFZ — the game has its limits. But probably some of them will. Or maybe they will do that in the sequel…

Do you like the fighters from this article? Who would you personally choose to play in Dragon Ball FighterZ?

How To Get Started In Call Of Duty: Warzone
Next Article

PUBG Tips and Tricks: How to Become an Expert at PUBG?
Leave a comment
Subscribe
Connect with
Connect with
0 Comments
Inline Feedbacks
View all comments