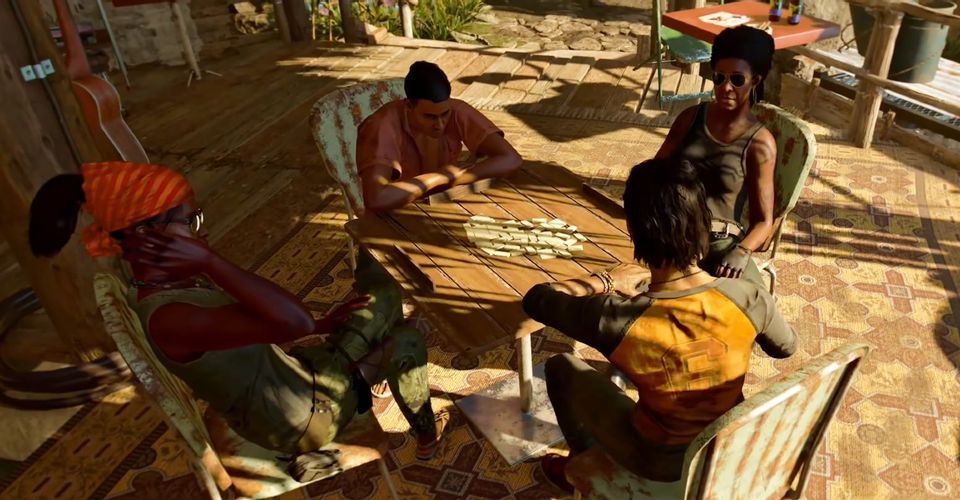 The PS5 is at the forefront of games development and the hardware that makes it all possible, playing host to some of the most graphically advanced and stunningly playable games known to man.

However, in amongst all that action and adventure there is another genre of game that has managed to come along for the ride: the classic game. These come in many forms, such as chess, poker, dice games, and dominoes, all of which now appear to some degree in either new PS5 games or even in television spots promoting the PlayStation brand as a whole. Here we take a look at exactly how classic board, card, and tile games have all made themselves an integral part of the PS5 ecosystem.

Before we dive into the video games that feature classic games in their midst, it would be remiss of us not to mention the fact that chess plays a lead role in the latest television spots released by PlayStation.

These adds feature a city skyline whose skyscrapers have been turned into giant chess pieces, which then begin to do battle. This just goes to show how much classic board games like chess (which have been around for thousands of years), and the in-game dynamics that rule them still dictate how modern games are structured. It also shows that they are popular enough to warrant being given such prominence in a contemporary ad campaign for a massive gaming company like PlayStation.

Chess is thriving online, and it was this surge in popularity that probably tempted PlayStation to pay homage to the game in their recent TV ad campaign

Online poker had its boom years in the late 90s and early 2000s but has been undergoing something of a revival of late, in part because its different iterations continue to pop up in the vast open worlds of games like GTA Online. The poker variant that appears in the game is 3-card poker, which differs slightly from the more recognizable Texas Hold’em version of the game that is played at most dedicated online poker sites. Indeed, the crossover between the two gaming realms has been strengthened further by the fact that many poker sites now enable their tournaments to be played with a console controller, meaning people can switch seamlessly between playing 3-card poker on GTA Online and Texas Hold’em on sites where poker is the sole focus of the players involved. It perhaps won’t be long before full fledged poker tournaments are taking place within open world video games.

Chess and Poker are far and away the two classic games that have made the leap online look like a piece of cake, but one that has not made the switch so well is dominoes. This does not seem to have dampened the enthusiasm of games developers and script writers, though, who are intent on the game that originated in ancient China reappearing during modern gameplay.

Such is the case in the incredible Far Cry 6, with the game’s protagonist even having a domino tile tattooed on her hand. Part of the reason that dominoes feature so prominently in Far Cry 6 is because the game is set in Cuba, a country whose population is somewhat obsessed with playing dominoes. This goes to show that once a classic game becomes an integral part of a community or culture, video game developers are almost duty bound to feature it heavily for their world building to look legit.

Another beautiful thing about video games is that developers and writers can take a pre-existing classic game and then tweak its rules to create their own original version. That is what occurred in Assassin’s Creed Valhalla, where developers mixed elements of classic dice games to create their own one called Orlog, which many players are still getting to grips with now.