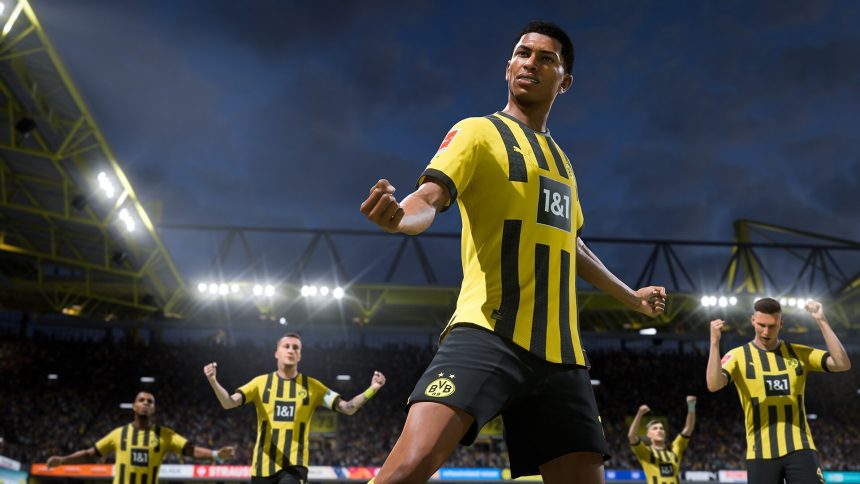 Bask in the victory

Players (henceforth called managers to differentiate from the virtual players on your team) take FIFA 23 as serious business. Every player on their team must be hand-picked and the best of the best. Positioning and composition are carefully considered; some will even resort to dirty tricks to get the upper hand. So, aside from throwing your FIFA 23 coins at the best players, what else should you do to secure your win?

The Virtual World is Not the Real World

The game may be based on the current status of real-world football, but a player being good IRL does not translate to also being good in-game. Unless you’re collecting players, you should look at their in-game stats, not their in-life skills.

In the meta (Most Efficient Tactics Available) of FIFA, a player’s pace dictates the game. After all, it is just a simulated world, so real-world physics won’t apply. Some of the best players in life have low pace in-game, so managers pass on them for faster players.

While going on the offensive is a valid tactic, neglecting defense will leave you vulnerable to counterattacks. Leaving a solid defensive line can protect you from these unexpected turnabouts and nip the rising ambush in the bud.

Pick the best goalkeeper and keep two defensive midfielders for defensive layers. It would be helpful to start early so you can get used to this kind of composition and make strategies for them.

The best formations constantly shift depending on how far along the season is. You have to keep up to avoid being left behind with outdated tactics. Make sure to keep in mind the above as you adjust and adapt to the changing meta.

When your focus is on the competition and not the collection, using your FIFA 23 coins on players that can mesh well with your team is a better use of the currency.

A bit of a dirty trick, but take care when you do this. It can create an opportunity for your enemy to turn things around. Getting too confident with your lead can result in a comeback for your opponent. Otherwise, it’s something that is easily overlooked when in a heated match. If you’re in the lead and time is almost up, doing this is in your favor.

Don’t forget, the opponent can do this to you too.

Play Where You Can Concentrate

Other people are distracting. Whether you’re living with family or have noisy neighbors, you should have a space where you can concentrate. That’s somewhere silent and still where you can’t be quickly taken out of the zone. Play your most competitive matches there and see the difference when you can put 100% of your mental faculties into the game.

If you have your family puttering around you or a party next door, you’ll be unconsciously tuned in to what they’re doing. This makes you distracted, even if you don’t know or notice. In that state, you’re more prone to making mistakes, which leaves you vulnerable, especially in the higher tiers.

Take Breaks, Especially When on a Losing Streak

As humans, we have needs we must fulfill. Sitting for hours on end staring at a screen is not healthy despite all the mental exercise. Take pauses every hour or so. Stand up, walk around a bit, or go to the bathroom. Drink some water. Grab a snack and eat it.

This lets our brains relax and rest from the grueling task of figuring out what to do in matches. As mentioned above, it is an exercise, so it gets tiring. Taking some breaks eases the fatigue and refreshes you for the next game. Sometimes, this is all you need to keep a winning streak.

Know When to Fold

If taking breaks does not help, that’s a sign that you should stop and try again tomorrow. Little breaks do not clear all the fatigue, so it builds up. When it gets too much, you’ll find yourself making more and more mistakes and fumbling with the controls.

You won’t win in that state, so quit the game. Eat a hearty meal and then go to sleep. Everything will be better tomorrow when your mind has cleared away the built-up fatigue and you’re energized for a long session.

Meta can only get you so far. It is also not a one-size-fits-all deal. The suggested strategies may work for you, or they might not. In the latter case, you can take some of the suggestions and go about the rest in your own way. Build a team that makes you enjoy playing. Though who you choose has a considerable influence on your chances of winning, ultimately, it’s up to you, the manager.

People find off-meta teams because it works for them. Experiment with team compositions and formations, and find the ones you like the best.

Focusing on the competitive aspect gives you unnecessary pressure to perform. Being too focused on the idea that you should win will leave more room for regret if you don’t. Sure, it might make you focus or concentrate more, but that’s more tiring on your psyche.

Relax and enjoy the game. Accept that you can’t win every match, so don’t stress about your losses. Figure out where you went wrong, and then do it right the next time. Learn from your mistakes and be a better manager next time. You’ll be more relaxed and less prone to burnout.

Enjoying the game lets you have more wins for your FIFA 23 account.

Fortnite Finally Gets A Tutorial
Next Article