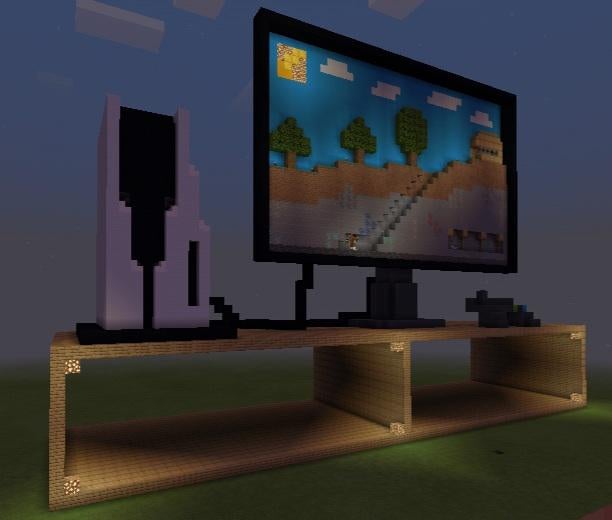 Did you know that Minecraft is the best-selling game of all time? It’s true; estimates suggest Minecraft has sold somewhere in the region of 238 million copies, putting it head and shoulders above its nearest competitor Grand Theft Auto V, which is sitting at a relatively paltry 155 million copies. Minecraft hasn’t got to where it is today by failing to be industrious; nobody could accuse Microsoft and Mojang of not releasing it on as many platforms as possible so as to take advantage of the insane sales potential this humble little sandbox creation game has.

Contents
There is no native Minecraft PS5 versionThe PS4 version is playable on PS5Minecraft is cross-platformWill there be a PS5 Minecraft edition?Will Minecraft get a PS5 upgrade?Where else can you play Minecraft?

With that in mind, it’s reasonable to expect Minecraft to be ported to every major console going, but there are still some platforms on which Mojang’s game can’t be found. Today, we’re asking whether there is a Minecraft PS5 edition; whether or not the game has been natively ported to Sony’s new console. Unfortunately, the answer might not be particularly pleasing if you’ve been waiting for some kind of visual or performance upgrade for the base Minecraft game, but there is some good news if you’re a PS5 owner.

There is no native Minecraft PS5 version

Let’s get the bad news out of the way first: there is no native PS5 Minecraft edition. You can’t download Minecraft natively for PS5; rather, you need to play the PS4 version instead. It’s also not clear whether Mojang and Microsoft intend to create a port of Minecraft for the PS5. Given that Mojang is now a Microsoft-owned company, it really wouldn’t surprise us if this wasn’t on the cards. For now, you’re just going to have to get used to the fact that there is no way to play Minecraft natively on PS5, because there isn’t a PS5 version of the game readily available for Sony’s next-gen console.

The PS4 version is playable on PS5

There is, however, some good news. The PS4 version of Minecraft is playable on PS5 thanks to backwards compatibility. The way it works is extremely simple; all you need to do is download Minecraft on your PS5, then fire it up via the user interface. There aren’t any extra steps necessary if you want to play Minecraft on PS5. Just download the game from the PlayStation Store and play it like you would any other game. It’ll work just fine; the PS5 will play pretty much every PS4 game (with some exceptions, but Minecraft isn’t one), so there’s no reason not to play it on your brand new console.

One important thing to note about the retail version of Minecraft is that it’s completely cross-platform. That means if you’re playing on PS4, you can play with your buddies on any other platform, including Switch, PC, and mobile. You will all need to have the Bedrock Edition of the game, which is different from the Java Edition on PC, so make sure your friends are running that version. However, the backwards compatible nature of the PS5 means that Minecraft is still fully cross-compatible if you’re playing on the new console, so don’t worry – you can still play with your Xbox and PC-loving friends!

Will there be a PS5 Minecraft edition?

The chances are that a PS5 Minecraft upgrade isn’t forthcoming. The reason for this is simple: as we’ve already stated, Microsoft is the owner of Minecraft developer Mojang. Since Microsoft is technically still in direct competition with Sony with regards to the PlayStation-Xbox console battle, it’s unlikely Microsoft will be in a hurry to add Minecraft to the list of games both consoles share. In fact, we’d fully expect Microsoft to postpone any announcement of a Minecraft PS5 edition so that they can get gamers hungry to play the game to pick up Xbox platforms instead.

Will Minecraft get a PS5 upgrade?

Of course, there’s a difference between releasing a native version of Minecraft for PS5 and upgrading the game so it takes advantage of new hardware. Even though a PS5-specific version of the game is just a remote possibility at this stage, an interim upgrade is decidedly more likely. However, unfortunately, we still don’t have any word from Mojang and Microsoft regarding whether they are considering this. Of course, Minecraft still looks and plays great on PS5 thanks to its PS4 backwards compatibility, but you’ll have to make do with the PS4 version for now, it seems.

Where else can you play Minecraft?

Sadly, if you have a PS4-specific save on Minecraft, you won’t be able to take it with you anywhere else. This is because the PS4 version doesn’t support saving a realm across platforms; it supports cross-play, but your saves will have to stay where they are. With that said, you can still play Minecraft on other platforms if you wish, and it might be helpful to download an extra copy on another platform so you can play with someone else in the same room. It’s also available on PC, mobile, Nintendo Switch, and Xbox consoles if you want to play with friends who have those devices.

Here’s hoping that Mojand and Microsoft announce some kind of Minecraft PS5 version within the next few months. It’s looking unlikely right now, but stranger things have happened, and since Microsoft seems to be feeling decidedly more cooperative these days, it could be on the cards. Of course, we’ll let you know as soon as we hear anything about this!

7 Great Games Like Escape From Tarkov On PS5
Next Article