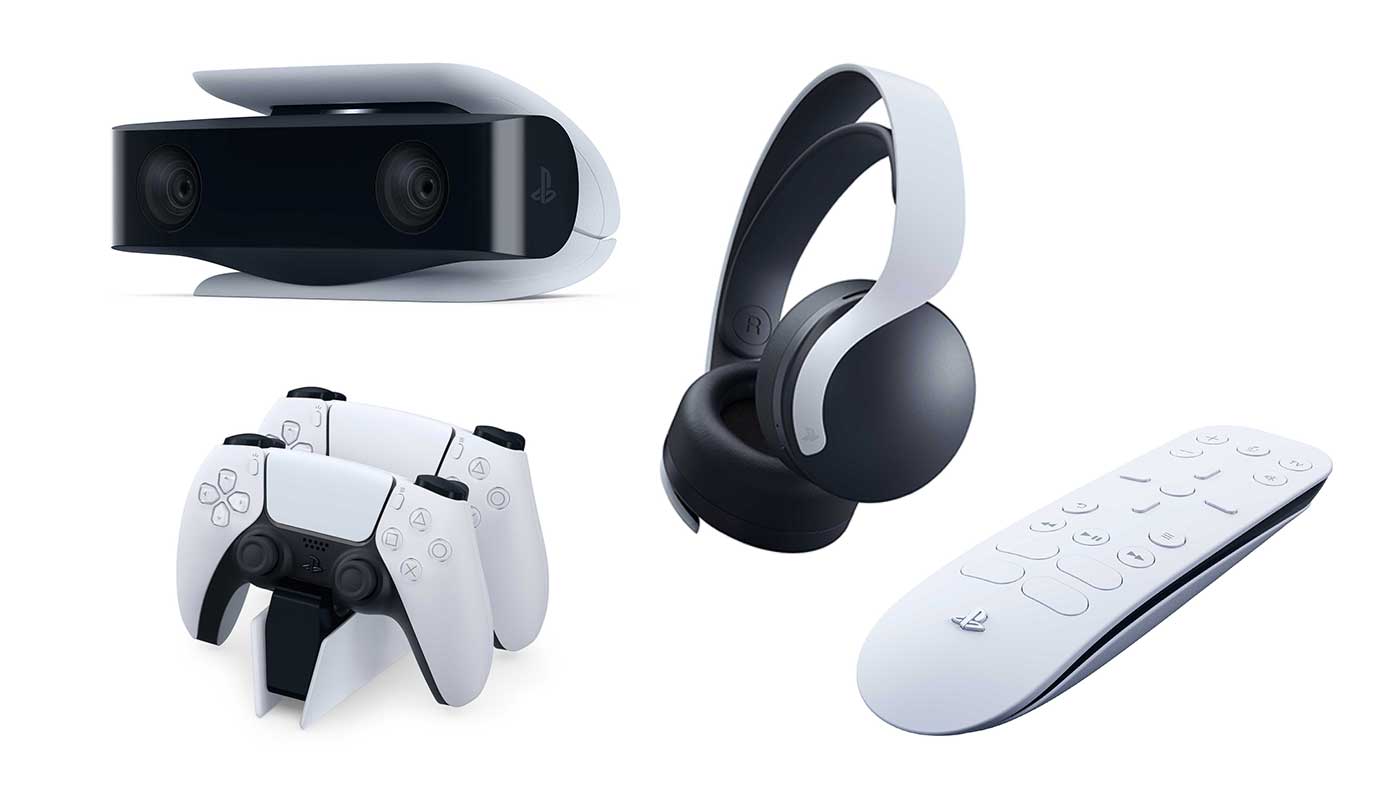 With the PS5’s release just around the corner (November 19th/12th depending on where you live), Sony have confirmed several accessories that can be used alongside the new PS5. On their official website, there are 5 different accessories which will be available at launch. But what are the best accessories to consider and are there any early alternatives?

To start things off, here is something slightly alternative and simple. In terms of charging accessories Sony offers a DualSense charging station which, as the name suggests, can charge two PS5 controllers simultaneously.

As you will find with all Sony’s official accessories, it comes in a sleek and stylish white with black detailing. The DualSense charging station’s minimalist design would look fine on any gamer’s shelf but as far as convenience goes, it may not be your best option.

Of course the PS5 only comes with one controller; purchasing a second controller will currently set you back around £60.

Having a second PS5 DualSense controller will be useful if you plan to have a pal over from where you can enjoy split screen games. Also, once one controller is out of juice you can instantly swap to a fully charged pad.

So assuming you only have one controller then perhaps the first PS5 accessory to consider is a USB-C charging cable. Rather than losing your controller on the dock as it charges, a simple cable plugged into the mains or one of the two USB ports the PS5 offers may be the better option for uninterrupted gaming sessions. Also, gone are the days of the micro-USB that supported the PS4’s DualShock 4 with its single entry point. The USB-C can enter into the PS5 both ways, up or down. Now it is an old and tired adage that one never inserts a USB cable in correctly the first time, however it is nice to have the convenience of USB-C compatibility.

More precisely, getting yourself an extra USB-C cable for the eminent launch of the PS5 is a handy alternative to the official DualSense charging station. Save yourself the time and money.

Much like the first accessory on this list, there are many alternatives. Sony has confirmed that similar to the PS4, it is possible to use an audio jack or USB headset with your PS5. It is fortunate that companies such as Sony allow such compatibility of its accessories where other companies may choose to form a monopoly. So for many this may be an opportunity to keep with their old headset or delve into the vast market of alternative headsets. However, with so much to choose from in the world of gaming headsets, let us give Sony’s official headset a fair trial.

The official headset for the PS5 is called the PULSE 3D Wireless Headset. With the word “PULSE” capitalised, it must be good? Sony claims this headset is “how games were made to sound” which is a good start as far as sound capabilities go. In terms of the specifications, audiophiles may be disappointed as the specific details are currently hard to come by. With that being said, pre-orders for the PULSE 3D Wireless Headset seem to be around the £89 mark at the time of writing so you can expect the sound quality and features to be quite high-range. What we do know is that the headset sports 3D audio powered by Sony’s Tempest 3D AudioTech. 3D audio has become an essential part of any gaming headset and Sony looks to deliver on this.

As far as comfort and convenience goes, the PULSE 3D Wireless Headset appears to tick all the boxes too. Our old friend USB-C makes another appearance offering its charging capabilities once the 12 hour battery has ran out of power. Being wireless is another tick in the convenience box and the USB wireless adaptor which connects the headset to the console is also compatible with the PS4. It can also be plugged into the PlayStation VR as well as mobile devices via a 3.5mm audio jack cable.

Overall, the PULSE 3D Wireless Headset appears to be a competitive headset at that price-point. It offers the same styling all the launch accessories and consoles have in that polished white with black detailing. It is seemingly comfortable with refined earpads and an adjustable headband. The audio specs are still somewhat vague but the promise of 3D audio is a good start and certainly makes this PS5 accessory one of the best to consider.

Another official accessory Sony is offering for the PS5 is a Media Remote. It may not seem very exciting and for many this may be an accessory that they will gloss over. With a pre-order price of approximately £25 it certainly will not be for everyone. In fact it may be worth waiting a bit to see if prices drop, but it is still a PS5 accessory that deserves some serious consideration and here’s why.

For a while now, the console has been the hub of entertainment for many. Whatever a Smart TV can do, the current generation of consoles is right there with them. All the apps, internet browsing – consoles can do it. The PS5 will be no different and a Media Remote epitomises this. As mentioned, the remote is quite a steep price for what essentially boils down to a bit of extra convenience but it is still a handy accessory to consider, especially for those that want to squeeze every bit of entertainment out of their PS5s. Sony strikes again with that savvy minimalist design and white finish and the buttons are rather telling. Besides the obvious buttons, there are Disney+, Netflix, YouTube and Spotify buttons; offering some of your favourite entertainment apps at the press of a button.

If you want to use every aspect of the PS5 as an entertainment hub then the Media Remote is worth some consideration, but perhaps wait for it to go on sale.

Other Accessories to Consider

There are of course other accessories that are worth a brief mention. It is impossible not to mention the new DualSense Wireless Controller in a piece about accessories. However, the new controller is an obvious purchase and a topic that has already been discussed in quite a lot of detail.

With that being said, a less obvious accessory that may be worth considering is the official HD camera for the PS5. A niche market, but those wishing to capture themselves in smooth 1080p can do so. It has never been easier to imitate your favourite Twitch streamer.

On the same note, the official HD Camera works alongside Sony’s PlayStation VR. Of course PlayStation VR was created for the PS4 but it is still compatible with the PS5. PlayStation VR can look a little rough around the edges at times but with the enhanced hardware of the PS5 there has never been a better time to invest in this exciting accessory.

How To Pre-order A PS5 – The Ultimate Guide
Next Article