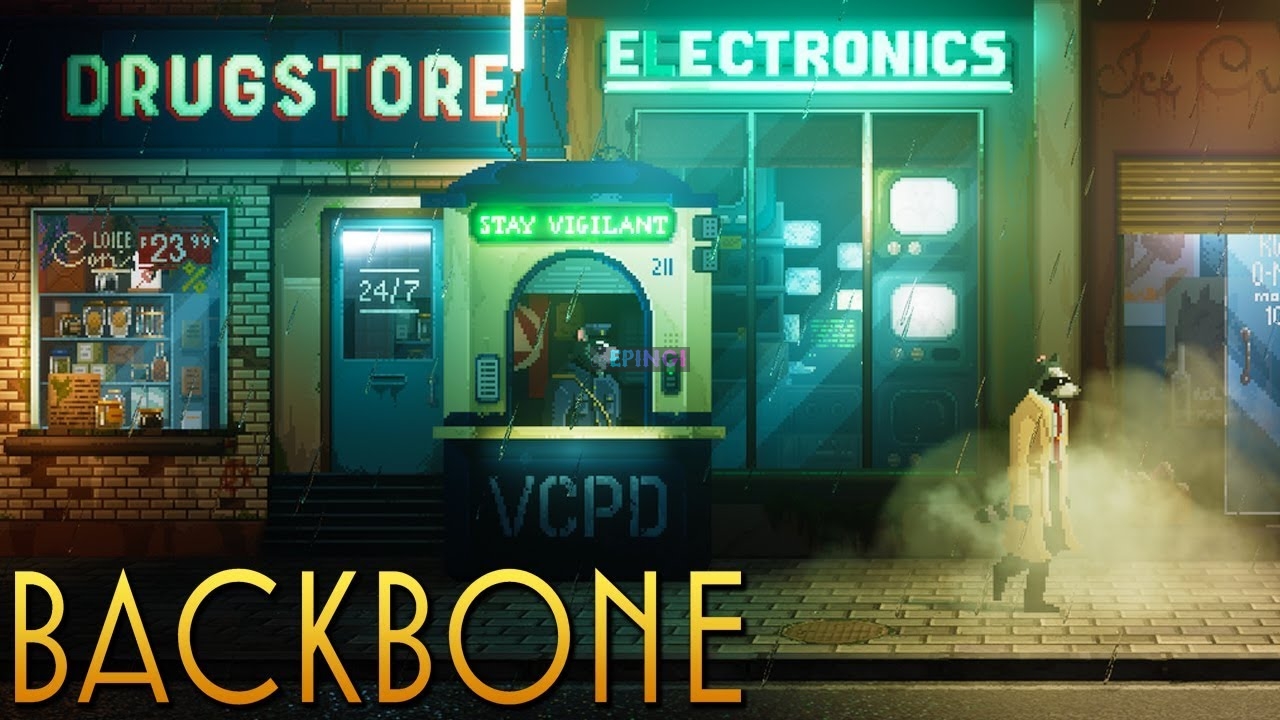 In recent years, a strange market appears to have opened up for anthropomorphic animals starring in noir-inflected detective tales. Whether it’s the grim analogies of Blacksad or the absurdity of Eric Garcia’s Anonymous Rex, there’s a real appetite for hard-boiled dog, cat, and dinosaur detectives that doesn’t seem to be going away anytime soon. Into this world comes Backbone, a detective adventure acting as the inaugural project from developer EggNut.

Backbone casts you as Howard Lotor, a raccoon PI thrust into the usual dark, seedy underbelly that is the cornerstone of noir fiction. Lotor isn’t a hero; he’s not even an exceptional person (raccoon?). He’s an ordinary man dealing with circumstances beyond his control, and as he explores the dystopian world of Vancouver, he’ll gradually uncover a mystery that threatens to unravel not only his world, but the world around him as well.

The first thing to note is that Backbone’s version of Vancouver is rendered with an achingly pixel-perfect aesthetic that makes it a joy just to explore and exist in this world. Moving Lotor around his surroundings, talking to the NPCs that make up the fabric of Vancouver, and uncovering clues as you go are all joyous thanks to the gorgeous animation and visual style. It’s less graphically impressive than Blacksad: Under the Skin, but the pixel art style makes it far more appealing to the eye.

If you’re hoping for a classic point-and-click adventure along the lines of Monkey Island or Broken Sword, you’re not going to find it here. Backbone very much belongs to the modern school of adventure gaming, one in which it’s not so much about the puzzles you solve as the story you experience. Backbone wants you to drink in its aesthetic and its narrative without worrying too much about gameplay, so if you’re looking for challenging puzzling, Backbone isn’t the game for you.

With that said, there is some gameplay on offer here, more’s the pity. Backbone features stealth sections that feel totally at odds with the easy pace of the rest of the game. There are also chase sequences during which you’ll need to flee from your pursuer. They don’t feel right couched within a relatively sedate philosophical rumination on life and death; it would have been better to let these sections play out automatically so that you’re not suddenly being asked to exercise skills Backbone hasn’t demanded from you thus far.

In order for a game like Backbone to succeed, all that’s needed is for the story to shine. It’s a shame, then, that the narrative here takes such an odd turn. We don’t want to spoil anything, but after the mystery has built to what feels like a climax, the story suddenly shifts and becomes about something else entirely. What Backbone has been up until that point is gone, and in its place is what often feels like a totally different game. It’s an impressive twist that feels intriguing, but it’s also poorly-thought-out and not in keeping with the rest of the experience.

If there’s one major criticism we can level at Backbone, it’s that it doesn’t seem to know what it is. It begins as a detective adventure game, but quickly drops this pretense when it becomes clear the game doesn’t want you to solve any interesting puzzles. It also wants to be a noir story about animals, but again, this idea gets dropped around halfway through in favour of something simultaneously far more ambitious and far less successfully executed.

Thankfully, Backbone is largely carried by the strength of its writing, even as the narrative falls apart towards the end. The animals possess unique voices, and speaking to them makes Vancouver feel alive. As with any good noir story, there are good people trying to make their way in a rotten world; hustlers looking for a chance to score big; and out-and-out bad guys simply waiting for a way to advance their own agendas. The cast of Backbone is truly special, and talking to them almost justifies the issues the narrative suffers from near the end.

It also helps that unlike many other detective adventures, Lotor is whatever you want him to be. The ending is fixed; don’t expect to unlock any significant branching pathways throughout Backbone. However, you can choose to answer NPCs’ questions and comments in whatever way you choose. If you want Lotor to be empathetic and understanding, you can make him that way. If, however, you prefer a stoic, cynical private eye stereotype, you can turn Lotor into that as well. It doesn’t change much beyond your own personal roleplaying immersion in the story, but it’s still nice.

Unfortunately, given that Backbone purports to be a story-focused adventure, it’s difficult to recommend it on that basis. The art style is beautiful and the dialogue is excellent, but the narrative to which those two elements are in service is fatally flawed. As you move through Lotor’s journey, you’ll become enamoured with Vancouver and its residents, only to have the rug pulled out from under you in the final act during what is probably one of the most ludicrous twists ever committed to a game story. If you can find Backbone on sale, we’d recommend picking it up just to see if it tickles your fancy, but as a narrative game in and of itself, we’d struggle to tell you it’s worth your time.