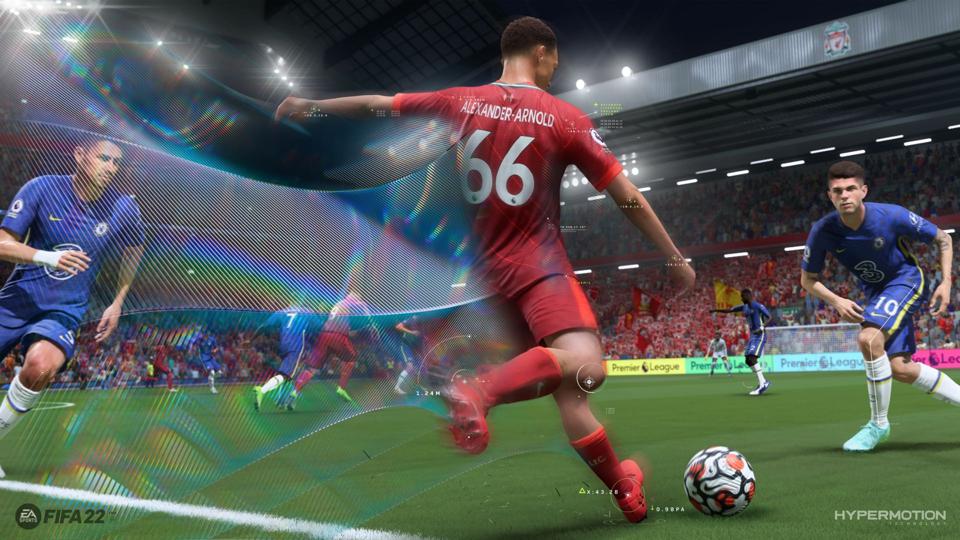 The long-running pitch battle for online supremacy in the football gaming world between EA Sports’ FIFA and the Konami-built PES – rebranded for its 2021 PS5 release as E-Football – is really reaching fever pitch this year as we edge close to the first anniversary of the release of the next-gen console, with both heavyweight titans strengthening their armour when it comes to online gameplay.

It is a widely-held belief that PES has historically had the advantage over their illustrious bigger name rivals owing to its more realistic, authentic gameplay that has elevated its status to become the premier choice for the traditional football gaming connoisseur, whilst FIFA could always profess to having the bells and whistles of fully-licensed teams, players and strips, a top tracklist of worldwide sounds and a far easier ‘pick up and play’ arcade style of gameplay suited to the younger generation of gamers – and your not-quite-so-techy  “what does this button do?” dad.

In more recent times and certainly since the PS4 came onto the scene it is FIFA that has taken the multi-player network format to a whole new league not only with their Online Co-op Friendlies, Seasons and ProClubs but also with the highly successful FIFA Ultimate Team (FUT) mode which has revolutionised the genre – leaving their rivals playing catch-up with their own version, known as myClub and its slightly more simple format.

This year Konami have sacked their ‘PES’ branding and installed a new name in the hotseat in the shape of E-Football – a sure-fire sign that the developers are throwing their weight behind a fully-immersive online experience… and it is entirely free-to-play too. In a statement they announced the aim to create the “perfect” virtual soccer environment, using a whole new game engine, new animations and revamped commands.

The move to free-to-play was something the developers envisaged a few years ago, as producer Seirato Kimura told IGN.com earlier this summer when the announcement was made, but the launch has been met by a whole host of problems and associated delays, even including a delay to the update patch designed to fix a lot of the issues. A nightmare start for E-Football which is already on the backfoot and has gifted an early lead to EA Sports and FIFA 22.

It seems the big guns in Canada, the home of “It’s In The Game”, are aiming to make that advantage count by racing into an unassailable lead – and they are looking to the PS5 console to help them in their quest to reinforce the immense online multiplayer football domination which began all the way back in 2004 with the introduction of the FIFA Interactive World Cup (FIWC) on the PS3 – a whole two consoles ago!

The FIWC tournament started out exactly how it described itself – as an interactive online World Cup with millions of gamers worldwide competing to be crowned world champion; changing its name to the more streamlined FIFA eWorld Cup (FeWC) in 2018 and then to the ever-so-slightly altered FIFAe World Cup two years later. Yes, we noticed the tiny difference too – the backspacing of the single letter “e” reflecting the series’ rebranding to “FIFAe” as they launched a whole new ball game with four online tournaments – the Club Series, the Nations Series, the eWorld Cup and the Continental Cup.

Now with the advent of the PS5 the guys over at EA Sports have really upped their game considerably with the FIFA 22 Global Series, signed exclusively to Sony’s flagship next-gen system. The FIFA Global Series (FGS) is EA Sports’ official top level tournament involving the top FIFA ballers in the world competing against one another in regional tournaments in online and eSports competitions to become ultimate champion of the FGS.

The strong relationship between PS consoles and FIFA releases continues

Some of those aforementioned ballers are becoming household names in the online gaming community – the current FIFAe World Cup champion is Mohammed Harkous (under the handle “MoAuba”), so much to the point where we could see eSports like this transcend into sports betting sites offering odds on such outcomes – hey, if they can do it for the Eurovision Song Contest they could do it for ESports and gaming!

The move to PS5 brings with it the most advanced FIFA yet which will include, amongst other new features, FUT Division Rivals – the premier game mode for those looking to prove their skills and qualify for competitions in the FIFA Global Series; team-based play as both FUT Champions Cups will feature 2v2 competition with four players at once; and 16 new countries joining the play.

In FIFA Global Series, the top performing players who competed in regional tournaments and domestic leagues in FIFA qualify for the Regional Playoffs at the end of the season to crown the FIFA 22 Global Series Regional Champion. To get top play in an FGS competition round, FIFA 22 players need to register, become FUT Champions verified, play in online regional cups and qualify for the regional playoffs competitions – a real decisive way of picking out the best of the best FIFA 22 players in the world.

Furthermore, registered players need to prove that they are an elite competitor to earn their entry into the Global Series by reaching the Elite 1 rank in FUT Champions. Registered players can become FUT Champions Verified by winning 27 games in a single Weekend League. Once players achieve Verified status, they are eligible to play in Online Regional Cups for the rest of the season. Players can become verified from playing Weekend Leagues.

FUT Champions Verified players then play head-to-head in Online Regional Cups through the season. These double elimination knockout tournaments take place three to five times in each region and players compete to earn Global Series Points based on their placements. The top ranked players at the end of the season will move on to the Regional Playoffs for the chance to be crowned the best FIFA 22 player in each region.

Registration is now open to enter and the tournaments will run from December to well into summer 2022 – a nice option for an alternative summer World Cup in light of the “real” competition in Qatar switching to the winter.

After the 2021 FIFAe World Cup and FIFAe Nations Cup were cancelled earlier this year due to the effects of the global Covid-19 pandemic, the excitement is mounting for the return of elite level online gaming in the form of FIFA 22 Global Series. It’s also a demonstration of the immense, unlimited capabilities of the console to have the best tournaments, the best teams and the best players in the competitive FIFA world going head-to-head exclusively on PS5. We cannot wait for kick off.

The 10 Best Sports Games On PS5
Next Article

Does PS5 Work On 1080p TVs?
Leave a comment
Subscribe
Connect with
Connect with
0 Comments
Inline Feedbacks
View all comments